The Image of Mercy 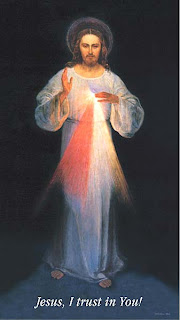 Image is not just

a picture, it is a

From her Diary on February 22, 1931 St. Faustina wrote : “In the evening, when I was in my cell, I saw the Lord Jesus clothed in a white garment. One hand [was] raised in the gesture of blessing, the other was touching the garment at the breast. From beneath the garment, slightly drawn aside at the breast, there were emanating two large rays, one red, the other pale...After a while, Jesus said to me, "Paint an image according to the pattern you see, with the signature: Jesus, I trust in You (Diary 47). I want this image…to be solemnly blessed on the first Sunday after Easter; that Sunday is to be the feast of my Mercy (Diary 49).” He promised to her, “By means of this Image I shall be granting many graces to souls” (Diary 570).

Jesus went on to exclaim, “I promise that the soul that will venerate this image will not perish. I also promise victory over [its] enemies already here on earth, especially at the hour of death. I Myself will defend it as My own glory (48). I desire that there be a Feast of Mercy. I want this image, which you will paint with a brush, to be solemnly blessed on the first Sunday after Easter; that Sunday is to be the Feast of Mercy (49).

But it was not until 1934 that this Image was painted by Eugeniusz Kazimirowski under the supervision of St. Faustina and Fr. Michael Sopocko her spiritual director.

On Good Friday, April 19, 1935, at three o’clock in the afternoon when Saint Faustina entered the chapel, Jesus said to her: “I desire that the image be publicly honored” (414). On the following Friday, just before the Feast of Divine Mercy, Saint Faustina’s confessor, Fr. Sopocko gave a sermon about Divine Mercy and when he began to speak about the great mercy of the Lord, the image came alive and the rays pierced the hearts of the people gathered there, but not all to the same degree. Some received so much more.

After the “original Vilnius” image had been painted it was seen for the first time in public during celebrations marking the close of the Jubilee Year of the Redemption of the World from April 26-28, 1935 at Ostra Brama (the “Dawn Gate” to the city of Vilnius). It was then hung in the corridor of a convent near the church and Jesus instructed St. Faustina, “Tell the confessor that the image is to be on view in the church and not within the enclosure of the convent that it’s in. By means of this image I shall be granting many graces to souls; so let every soul have access to it” (570).
at 4:47 PM

Email ThisBlogThis!Share to TwitterShare to FacebookShare to Pinterest
Labels: The Image