"God’s passionate love for his people — for humanity — is at the same time a forgiving love. It is so great that it turns God against himself, his love against his justice.”

This is a startling, radical, statement about divine mercy — the kind of declaration that one might expect to see attributed to Pope John Paul II. But it was Pope Benedict XVI who wrote it, in his first encyclical Deus Caritas Est (God Is Love). 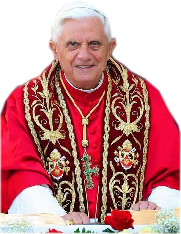 In his homily before the conclave that elected him, he summed up John Paul’s pontificate by speaking about the late Pope’s emphasis on the Divine Mercy: “Jesus Christ is divine mercy in person: Encountering Christ means encountering the mercy of God,” said Pope Benedict. “The mercy of Christ is not a cheap grace; it does not presume a trivialization of evil. Christ carries in his body and on his soul all the weight of evil, and all its destructive force. He burns and transforms evil through suffering, in the fire of his suffering love.”

He often noted that Pope John Paul II died after Mercy Sunday Mass. And in a March 26 homily last year, Benedict said forcefully: “The Pope, in this last text which is like a testament, then added: ‘How much the world needs to understand and accept Divine Mercy!’”

In a visit with the sick on May 7, Pope Benedict embraced not just the message of Divine Mercy, but the specific devotion popularized by St. Faustina.

The image the devotion promotes is a portrait of Jesus with rays of light emanating from his heart. The words “Jesus, I trust in you” are inscribed below.

Pope Benedict told the sick people, “You who say in silence: ‘Jesus, I trust in you’ teach us that there is no faith more profound, no hope more alive and no love more ardent than the faith, hope and love of a person who in the midst of suffering places himself securely in God’s hands.”

He later spoke about visiting the convent where “Sister Faustina Kowalska, contemplating the shining wounds of the Risen Christ, received a message of trust for humanity which John Paul II echoed and interpreted and which really is a central message precisely for our time: mercy as God’s power, as a divine barrier against the evil of the world.”

In his homilies, the Holy Father has given us some of our most eloquent and adamant enunciations of God’s mercy:

Men and women are prone to doubt God’s care for them. So Pope Benedict stressed: “God loves us in a way that we might call ‘obstinate’ and enfolds us in his inexhaustible tenderness.”

The wrong kind of emphasis on God’s mercy can create the impression that God forgives all in an apathetic way, more like a benign uncle than a loving Father.

So the Pope stresses God’s anger, too. “[T]he anger and mercy of the Lord alternate in a dramatic sequence, but love triumphs in the end, for God is love.”

And always, he seeks to root trust in God’s mercy in the Gospels and the sacraments rather than in private revelation.

“How many people also in our time are in search of God, in search of Jesus and of his Church, in search of divine mercy, and are waiting for a ‘sign’ that will touch their minds and their hearts!” he said, in one homily. “Today, as then, the Evangelist reminds us that the only ‘sign’ is Jesus raised on the cross: Jesus who died and rose is the absolutely sufficient sign.”

The Church grants an indulgence for participation in Mercy Sunday devotions (see page B2). In his new document on the Eucharist, Pope Benedict recommends such indulgences, but emphasizes that the sacraments of confession and the Eucharist are the most important aspects of them.

“To understand and accept God’s merciful love: May this be your commitment, first of all in your families and then in every neighborhood milieu.”

This Mercy Sunday is a good day to start.

Article from the National Catholic Register:  http://www.ncregister.com/site/article/2222
at 8:52 AM