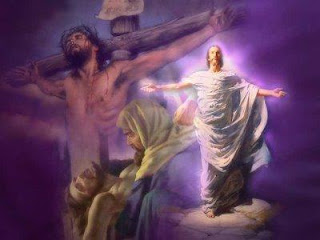 The cross of Christ on Calvary is also a witness to the strength of evil against the very Son of God, against the one who, alone among all the sons of men, was by His nature absolutely innocent and free from sin, and whose coming into the world was untainted by the disobedience of Adam and the inheritance of original sin. And here, precisely in Him, in Christ, justice is done to sin at the price of His sacrifice, of His obedience "even to death."81 He who was without sin, "God made him sin for our sake."82 Justice is also brought to bear upon death, which from the beginning of man's history had been allied to sin. Death has justice done to it at the price of the death of the one who was without sin and who alone was able-by means of his own death-to inflict death upon death.83 In this way the cross of Christ, on which the Son, consubstantial with the Father, renders full justice to God, is also a radical revelation of mercy, or rather of the love that goes against what constitutes the very root of evil in the history of man: against sin and death.

The cross is the most profound condescension of God to man and to what man-especially in difficult and painful moments-looks on as his unhappy destiny. The cross is like a touch of eternal love upon the most painful wounds of man's earthly existence; it is the total fulfillment of the messianic program that Christ once formulated in the synagogue at Nazareth 84 and then repeated to the messengers sent by John the Baptist.85 According to the words once written in the prophecy of Isaiah,86 this program consisted in the revelation of merciful love for the poor, the suffering and prisoners, for the blind, the oppressed and sinners. In the paschal mystery the limits of the many sided evil in which man becomes a sharer during his earthly existence are surpassed: the cross of Christ, in fact, makes us understand the deepest roots of evil, which are fixed in sin and death; thus the cross becomes an eschatological sign. Only in the eschatological fulfillment and definitive renewal of the world will love conquer, in all the elect, the deepest sources of evil, bringing as its fully mature fruit the kingdom of life and holiness and glorious immortality. The foundation of this eschatological fulfillment is already contained in the cross of Christ and in His death. The fact that Christ "was raised the third day"87 constitutes the final sign of the messianic mission, a sign that perfects the entire revelation of merciful love in a world that is subject to evil. At the same time it constitutes the sign that foretells "a new heaven and a new earth,"88 when God "will wipe away every tear from their eyes, there will be no more death, or mourning no crying, nor pain, for the former things have passed away."89
at 10:08 PM