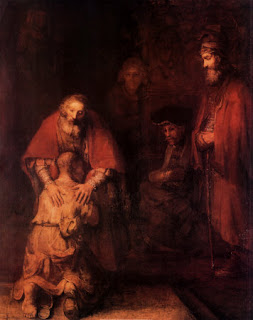 That son, who receives from the father the portion of the inheritance that is due to him and leaves home to squander it in a far country "in loose living," in a certain sense is the man of every period, beginning with the one who was the first to lose the inheritance of grace and original justice. The analogy at this point is very wide- ranging. The parable indirectly touches upon every breach of the covenant of love, every loss of grace, every sin. In this analogy there is less emphasis than in the prophetic tradition on the unfaithfulness of the whole people of Israel, although the analogy of the prodigal son may extend to this also. "When he had spent everything," the son "began to be in need," especially as "a great famine arose in that country" to which he had gone after leaving his father's house. And in this situation "he would gladly have fed on" anything, even "the pods that the swine ate," the swine that he herded for "one of the citizens of that country." But even this was refused him.


The analogy turns clearly towards man's interior. The inheritance that the son had received from his father was a quantity of material goods, but more important than these goods was his dignity as a son in his father's house. The situation in which he found himself when he lost the material goods should have made him aware of the loss of that dignity. He had not thought about it previously, when he had asked his father to give him the part of the inheritance that was due to him, in order to go away. He seems not to be conscious of it even now, when he says to himself: "How many of my father's hired servants have bread enough and to spare, but I perish here with hunger." He measures himself by the standard of the goods that he has lost, that he no longer "possesses," while the hired servants of his father's house "possess" them. These words express above all his attitude to material goods; nevertheless under their surface is concealed the tragedy of lost dignity, the awareness of squandered sonship.
at 8:21 AM