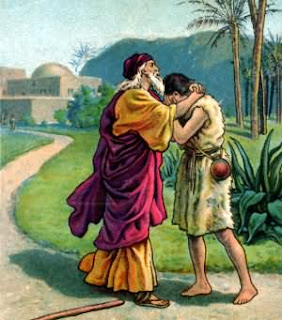 It is at this point that he makes the decision: "I will arise and go to my father, and I will say to him, 'Father, I have sinned against heaven and before you; I am no longer worthy to be called your son. Treat me as one of your hired servants.'"63 These are words that reveal more deeply the essential problem. Through the complex material situation in which the prodigal son found himself because of his folly, because of sin, the sense of lost dignity had matured. When he decides to return to his father's house, to ask his father to be received-no longer by virtue of his right as a son, but as an employee-at first sight he seems to be acting by reason of the hunger and poverty that he had fallen into; this motive, however, is permeated by an awareness of a deeper loss: to be a hired servant in his own father's house is certainly a great humiliation and source of shame.

Nevertheless, the prodigal son is ready to undergo that humiliation and shame. He realizes that he no longer has any right except to be an employee in his father's house. His decision is taken in full consciousness of what he has deserved and of what he can still have a right to in accordance with the norms of justice. Precisely this reasoning demonstrates that, at the center of the prodigal son's consciousness, the sense of lost dignity is emerging, the sense of that dignity that springs from the relationship of the son with the father. And it is with this decision that he sets out.


In the parable of the prodigal son, the term "justice" is not used even once; just as in the original text the term "mercy" is not used either. Nevertheless, the relationship between justice and love, that is manifested as mercy, is inscribed with great exactness in the content of the Gospel parable. It becomes more evident that love is transformed into mercy when it is necessary to go beyond the precise norm of justice-precise and often too narrow. The prodigal son, having wasted the property he received from his father, deserves - after his return - to earn his living by working in his father's house as a hired servant and possibly, little by little, to build up a certain provision of material goods, though perhaps never as much as the amount he had squandered.

This would be demanded by the order of justice, especially as the son had not only squandered the part of the inheritance belonging to him but had also hurt and offended his father by his whole conduct. Since this conduct had in his own eyes deprived him of his dignity as a son, it could not be a matter of indifference to his father. It was bound to make him suffer. It was also bound to implicate him in some way. And yet, after all, it was his own son who was involved, and such a relationship could never be altered or destroyed by any sort of behavior. The prodigal son is aware of this and it is precisely this awareness that shows him clearly the dignity which he has lost and which makes him honestly evaluate the position that he could still expect in his father's house.
at 6:35 AM