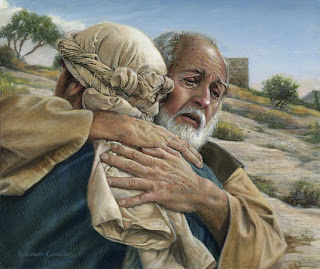 This exact picture of the prodigal son's state of mind enables us to understand exactly what the mercy of God consists in. There is no doubt that in this simple but penetrating analogy the figure of the father reveals to us God as Father. The conduct of the father in the parable and his whole behavior, which manifests his internal attitude, enables us to rediscover the individual threads of the Old Testament vision of mercy in a synthesis which is totally new, full of simplicity and depth. The father of the prodigal son is faithful to his fatherhood, faithful to the love that he had always lavished on his son. This fidelity is expressed in the parable not only by his immediate readiness to welcome him home when he returns after having squandered his inheritance; it is expressed even more fully by that joy, that merrymaking for the squanderer after his return, merrymaking which is so generous that it provokes the opposition and hatred of the elder brother, who had never gone far away from his father and had never abandoned the home.

The father's fidelity to himself - a trait already known by the Old Testament term hesed - is at the same time expressed in a manner particularly charged with affection. We read, in fact, that when the father saw the prodigal son returning home "he had compassion, ran to meet him, threw his arms around his neck and kissed him."64 He certainly does this under the influence of a deep affection, and this also explains his generosity towards his son, that generosity which so angers the elder son. Nevertheless, the causes of this emotion are to be sought at a deeper level. Notice, the father is aware that a fundamental good has been saved: the good of his son's humanity. Although the son has squandered the inheritance, nevertheless his humanity is saved.

Indeed, it has been, in a way, found again. The father's words to the elder son reveal this: "It was fitting to make merry and be glad, for this your brother was dead and is alive; he was lost and is found."65 In the same chapter fifteen of Luke's Gospel, we read the parable of the sheep that was found66 and then the parable of the coin that was found.67 Each time there is an emphasis on the same joy that is present in the case of the prodigal son. The father's fidelity to himself is totally concentrated upon the humanity of the lost son, upon his dignity. This explains above all his joyous emotion at the moment of the son's return home.
at 8:13 PM