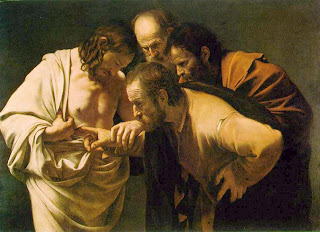 The Paschal Mystery is Christ at the summit of the revelation of the inscrutable mystery of God. It is precisely then that the words pronounced in the Upper Room are completely fulfilled: "He who has seen me has seen the Father."96 In fact, Christ, whom the Father "did not spare"97 for the sake of man and who in His passion and in the torment of the cross did not obtain human mercy, has revealed in His resurrection the fullness of the love that the Father has for Him and, in Him, for all people. "He is not God of the dead, but of the living."98 In His resurrection Christ has revealed the God of merciful love, precisely because He accepted the cross as the way to the resurrection. And it is for this reason that-when we recall the cross of Christ, His passion and death-our faith and hope are centered on the Risen One: on that Christ who "on the evening of that day, the first day of the week, . . .stood among them" in the upper Room, "where the disciples were, ...breathed on them, and said to them: 'Receive the Holy Spirit. If you forgive the sins of any, they are forgiven; if you retain the sins of any, they are retained.'"99

Here is the Son of God, who in His resurrection experienced in a radical way mercy shown to Himself, that is to say the love of the Father which is more powerful than death. And it is also the same Christ, the Son of God, who at the end of His messianic mission - and, in a certain sense, even beyond the end - reveals Himself as the inexhaustible source of mercy, of the same love that, in a subsequent perspective of the history of salvation in the Church, is to be everlastingly confirmed as more powerful than sin. The paschal Christ is the definitive incarnation of mercy, its living sign in salvation history and in eschatology. In the same spirit, the liturgy of Eastertide places on our lips the words of the Psalm: Misericordias Domini in aeternum cantabo.100
at 3:38 PM