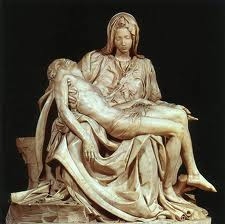 Mary, then, is the one who has the deepest knowledge of the mystery of God's mercy. She knows its price, she knows how great it is. In this sense, we call her the Mother of mercy: our Lady of mercy, or Mother of divine mercy; in each one of these titles there is a deep theological meaning, for they express the special preparation of her soul, of her whole personality, so that she was able to perceive, through the complex events, first of Israel, then of every individual and of the whole of humanity, that mercy of which "from generation to generation"105 people become sharers according to the eternal design of the most Holy Trinity.


The above titles which we attribute to the Mother of God speak of her principally, however, as the Mother of the crucified and risen One; as the One who, having obtained mercy in an exceptional way, in an equally exceptional way "merits" that mercy throughout her earthly life and, particularly, at the foot of the cross of her Son; and finally as the one who, through her hidden and at the same time incomparable sharing in the messianic mission of her Son, was called in a special way to bring close to people that love which He had come to reveal: the love that finds its most concrete expression vis-a-vis the suffering, the poor, those deprived of their own freedom, the blind, the oppressed and sinners, just as Christ spoke of them in the words of the prophecy of Isaiah, first in the synagogue at Nazareth106 and then in response to the question of the messengers of John the Baptist.107

It was precisely this "merciful" love, which is manifested above all in contact with moral and physical evil, that the heart of her who was the Mother of the crucified and risen One shared in singularly and exceptionally - that Mary shared in. In her and through her, this love continues to be revealed in the history of the Church and of humanity. This revelation is especially fruitful because in the Mother of God it is based upon the unique tact of her maternal heart, on her particular sensitivity, on her particular fitness to reach all those who most easily accept the merciful love of a mother. This is one of the great life-giving mysteries of Christianity, a mystery intimately connected with the mystery of the Incarnation.


"The motherhood of Mary in the order of grace," as the Second Vatican Council explains, "lasts without interruption from the consent which she faithfully gave at the annunciation and which she sustained without hesitation under the cross, until the eternal fulfillment of all the elect. In fact, being assumed into heaven she has not laid aside this office of salvation but by her manifold intercession she continues to obtain for us the graces of eternal salvation. By her maternal charity, she takes care of the brethren of her Son who still journey on earth surrounded by dangers and difficulties, until they are led into their blessed home."108
at 6:35 AM