In each of these meanings penance is closely connected with reconciliation, for reconciliation with God, with oneself and with others implies overcoming that radical break which is sin. And this is achieved only through the interior transformation or conversion which bears fruit in a person s life through acts of penance. 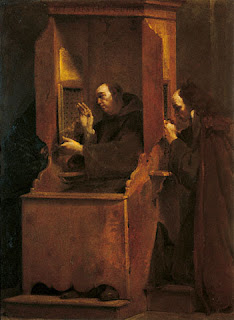 The basic document of the synod (also called the lineamenta), which was prepared with the sole purpose of presenting the theme while stressing certain fundamental aspects of it, enabled the ecclesial communities throughout the world to reflect for almost two years on these aspects of a question-that of conversion and reconciliation-which concerns everyone. It also enabled them to draw from it a fresh impulse for the Christian life And Apostolate, That reflection was further deepened in the more immediate preparation for the work of the synod, thanks to the instrumentum laboris which was sent in due course to the bishops and their collaborators. After that, the synod fathers, assisted by all those called to attend the actual sessions, spent a whole month assiduously dealing with the theme itself and with the numerous and varied questions connected with it. There emerged from the discussions, from the common study and from the diligent and accurate work done, a large and precious treasure which the final propositions sum up in their essence.

The synod's view does not ignore the acts of reconciliation (some of which pass almost unobserved in their daily ordinariness) which, though in differing degrees, serve to resolve the many tensions, to overcome the many conflicts and to conquer the divisions both large and small by restoring unity. But the synod's main concern was to discover in the depth of these scattered acts the hidden root- reconciliation so to speak at the source," which takes place in people's hearts and minds.

The church's charism and likewise her unique nature vis-a-vis reconciliation, at whatever level it needs to be achieved, lie in the fact that she always goes back to that reconciliation at the source. For by reason of her essential mission, the church feels an obligation to go to the roots of that original wound of sin in order to bring healing and to re-establish, so to speak, an equally original reconciliation which will be the effective principle of all true reconciliation. This is the reconciliation which the church had in mind and which she put forward through the synod.

Sacred Scripture speaks to us of this reconciliation, inviting us to make every effort to attain it.(15) But Scripture also tells us that it is above all a merciful gift of God to humanity.(16) The history of salvation-the salvation of the whole of humanity as well as of every human being of whatever period-is the wonderful history of a reconciliation: the reconciliation whereby God, as Father, in the blood and the cross of his Son made man, reconciles the world to himself and thus brings into being a new family of those who have been reconciled.
at 11:07 AM