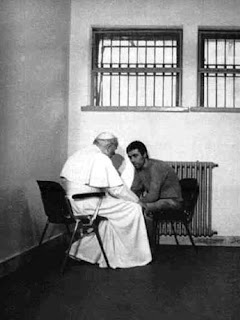 Thus, mercy becomes an indispensable element for shaping mutual relationships between people, in a spirit of deepest respect for what is human, and in a spirit of mutual brotherhood. It is impossible to establish this bond between people, if they wish to regulate their mutual relationships solely according to the measure of justice. In every sphere of interpersonal relationships justice must, so to speak, be "corrected " to a considerable extent by that love which, as St. Paul proclaims, "is patient and kind" or, in other words, possesses the characteristics of that merciful love which is so much of the essence of the Gospel and Christianity. Let us remember, furthermore, that merciful love also means the cordial tenderness and sensitivity so eloquently spoken of in the parable of the prodigal son,123 and also in the parables of the lost sheep and the lost coin.124 Consequently, merciful love is supremely indispensable between those who are closest to one another: between husbands and wives, between parents and children, between friends; and it is indispensable in education and in pastoral work.


Its sphere of action, however, is not limited to this. If Paul VI more than once indicated the civilization of love"125 as the goal towards which all efforts in the cultural and social fields as well as in the economic and political fields should tend. it must be added that this good will never be reached if in our thinking and acting concerning the vast and complex spheres of human society we stop at the criterion of "an eye for an eye, a tooth for a tooth"126 and do not try to transform it in its essence, by complementing it with another spirit. Certainly, the Second Vatican Council also leads us in this direction, when it speaks repeatedly of the need to make the world more human,127 and says that the realization of this task is precisely the mission of the Church in the modern world. Society can become ever more human only if we introduce into the many-sided setting of interpersonal and social relationships, not merely justice, but also that "merciful love" which constitutes the messianic message of the Gospel.

Society can become "ever more human" only when we introduce into all the mutual relationships which form its moral aspect the moment of forgiveness, which is so much of the essence of the Gospel. Forgiveness demonstrates the presence in the world of the love which is more powerful than sin. Forgiveness is also the fundamental condition for reconciliation, not only in the relationship of God with man, but also in relationships between people. A world from which forgiveness was eliminated would be nothing but a world of cold and unfeeling justice, in the name of which each person would claim his or her own rights vis-a- vis others; the various kinds of selfishness latent in man would transform life and human society into a system of oppression of the weak by the strong, or into an arena of permanent strife between one group and another.
at 8:05 PM