80 Years Ago, Today on 22nd February 1931 Jesus revealed to St. Faustina the Image of His Divine Mercy 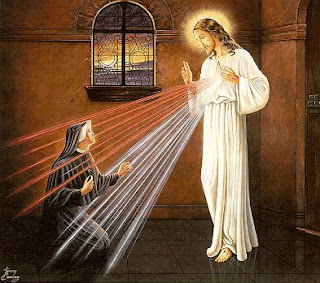 Saint Faustina was in her room in the convent in Plock, sometime late in the evening of 22nd February 1931. Her description of the momentous event is recorded in her diary of that day. She said, in the evening she was suddenly aware of a figure appearing in her room, she recognised the figure as Jesus, dressed in a white garment. (Diary No.47)

His right hand was raised in the gesture of a blessing, the left one was touching His breast where two bright clusters of rays starting from His heart and spreading out as they descended to the floor - one cluster was red, the other pale, showing as pale blue in the original painting, as described by her to the first artist who painted this image

On this first of many appearances of Jesus the Son of God to Sr.Faustina He requested her to have an image painted as she then saw Him. An image He told her that would be a means for great graces to be bestowed to all who prayed before it and asked for mercy for themselves and others. He told her it should have the signature "Jesus I trust in You" which implied, this should be repeated meaningfully by all who seek graces from it.

Jesus wanted this image of Himself as Divine Mercy to be honoured, throughout the world. And the importance of this was repeated again and again during His visits to Sr.Faustina. He also added some extraordinary promises connected with the worship of the image.

Wherever you are, perhaps try to venerate an Image of Divine Mercy today in thanksgiving for such a great gift to all of us.  We must always listen and do what Jesus asked us to do in humility and obedience.
at 8:42 AM