The Sacraments
27. The second divinely instituted means which the church offers for the pastoral activity of penance and reconciliation is constituted by the sacraments. 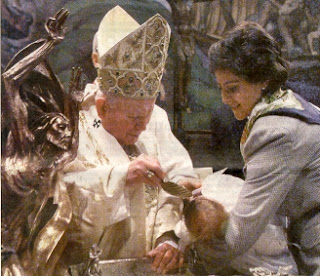 In the mysterious dynamism of the sacraments, so rich in symbolism and content, one can discern one aspect which is not always emphasized: Each sacrament, over and above its own proper grace, is also a sign of penance and reconciliation. Therefore in each of them it is possible to relive these dimensions of the spirit.
Baptism is of course a salvific washing which, as St Peter says, is effective "not as a removal of dirt from the body but as an appeal to God for a clear conscience."(151) It is death, burial and resurrection with the dead, buried and risen Christ.(152) It is a gift of the Holy Spirit through Christ.(153) But this essential and original constituent of Christian baptism, far from eliminating the penitential element already present in the baptism which Jesus himself received from John "to fulfill all righteousness,"(154) in fact enriches it. In other words, it is a fact of conversion and of reintegration into the right order of relationships with God, of reconciliation with God, with the elimination of the original stain and the consequent introduction into the great family of the reconciled.
Confirmation likewise, as a ratification of baptism and together with baptism a sacrament of initiation, in conferring the fullness of the Holy Spirit and in bringing the Christian life to maturity, signifies and accomplishes thereby a greater conversion of the heart and brings about a more intimate and effective membership of the same assembly of the reconciled, which is the church of Christ. 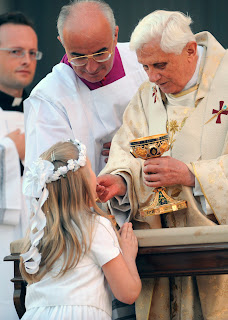 The definition which St. Augustine gives of the eucharist as "sacramentum pietatis, signum unitatis, vinculum caritatis"(155) clearly illustrates the effects of personal sanctification (pietas) and community reconciliation (unitas and caritas) which derive from the very essence of the eucharistic mystery as an unbloody renewal of the sacrifice of the cross, the source of salvation and of reconciliation for all people.
However, it must be remembered that the church, guided by faith in this great sacrament, teaches that no Christian who is conscious of grave sin can receive the eucharist before having obtained God's forgiveness. This we read in the instruction Eucharisticum Mysterium which, duly approved by Paul VI, fully confirms the teaching of the Council of Trent: "The eucharist is to be offered to the faithful also 'as a remedy, which frees us from daily faults and preserves us from mortal sin' and they are to be shown the fitting way of using the penitential parts of the liturgy of the Mass. The person who wishes to receive holy communion is to be reminded of the precept: Let a man examine himself" (1 Cor 11:28). And the church's custom shows that such an examination is necessary, because no one who is conscious of being in mortal sin, however contrite he may believe himself to be, is to approach the holy eucharist without having first made a sacramental confession. If this person finds himself in need and has no means of going to confession, he should first make an act of perfect contrition."(116) 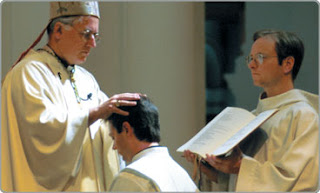 The sacrament of orders is intended to give to the church the pastors who, besides being teachers and guides, are called to be witnesses and workers of unity, builders of the family of God, and defenders and preservers of the communion of this family against the sources of division and dispersion.
The sacrament of matrimony, the exaltation of human love under the action of grace, is a sign of the love of Christ for the church. But it is also a sign of the victory which Christ grants to couples in resisting the forces which deform and destroy love, in order that the family born from this sacrament may be a sign also of the reconciled and reconciling church for a world reconciled in all its structures and institutions.
Finally, the anointing of the sick in the trial of illness and old age and especially at the Christian's final hour is a sign of definitive conversion to the Lord and of total acceptance of suffering and death as a penance for sins. And in this is accomplished supreme reconciliation with the Father. 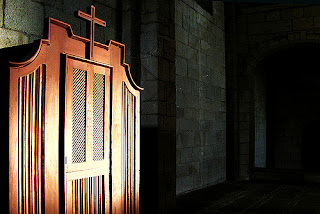