31. The truths mentioned above, powerfully and clearly confirmed by the synod and contained in the propositions, can be summarized in the following convictions of faith, to which are connected all the other affirmations of the Catholic doctrine on the sacrament of penance. 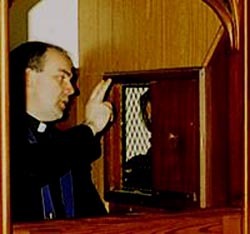 I. The first conviction is that for a Christian the sacrament of penance is the primary way of obtaining forgiveness and the remission of serious sin committed after baptism. Certainly the Savior and his salvific action are not so bound to a sacramental sign as to be unable in any period or area of the history of salvation to work outside and above the sacraments. But in the school of faith we learn that the same Savior desired and provided that the simple and precious sacraments of faith would ordinarily be the effective means through which his redemptive power passes and operates. It would therefore be foolish, as well as presumptuous, to wish arbitrarily to disregard the means of grace and salvation which the Lord has provided and, in the specific case, to claim to receive forgiveness while doing without the sacrament which was instituted by Christ precisely for forgiveness. The renewal of the rites carried out after the council does not sanction any illusion or alteration in this direction. According to the church's intention, it was and is meant to stir up in each one of us a new impulse toward the renewal of our interior attitude; toward a deeper understanding of the nature of the sacrament of penance; toward a reception of the sacrament which is more filled with faith, not anxious but trusting; toward a more frequent celebration of the sacrament which is seen to be completely filled with the Lord's merciful love.

II. The second conviction concerns the function of the sacrament of penance for those who have recourse to it. According to the most ancient traditional idea, the sacrament is a kind of judicial action; but this takes place before a tribunal of mercy rather than of strict and rigorous justice, which is comparable to human tribunals only by analogy namely insofar as sinners reveal their sins and their condition as creatures subject to sin; they commit themselves to renouncing and combating sin; accept the punishment (sacramental penance) which the confessor imposes on them and receive absolution from him.

But as it reflects on the function of this sacrament, the church's consciousness discerns in it, over and above the character of judgment in the sense just mentioned, a healing of a medicinal character. And this is linked to the fact that the Gospel frequently presents Christ as healer,(179) while his redemptive work is often called, from Christian antiquity, medicina salutis. "I wish to heal, not accuse," St. Augustine said, referring to the exercise of the pastoral activity regarding penance,(180) and it is thanks to the medicine of confession that the experience of sin does not degenerate into despair.(181) The Rite of Penance alludes to this healing aspect of the sacrament,(182) to which modern man is perhaps more sensitive, seeing as he does in sin the element of error but even more the element of weakness and human frailty.

Whether as a tribunal of mercy or a place of spiritual healing, under both aspects the sacrament requires a knowledge of the sinner's heart in order to be able to judge and absolve, to cure and heal. Precisely for this reason the sacrament involves on the part of the penitent a sincere and complete confession of sins. This therefore has a raison d'etre not only inspired by ascetical purposes (as an exercise of humility and mortification), but one that is inherent in the very nature of the sacrament.
at 6:31 AM