IV. There remains to be made a brief mention of other important convictions about the sacrament of penance. 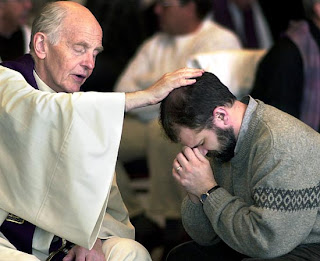 First of all, it must be emphasized that nothing is more personal and intimate that this sacrament, in which the sinner stands alone before God with his sin, repentance and trust. No one can repent in his place or ask forgiveness in his name. There is a certain solitude of the sinner in his sin, and this can be seen dramatically represented in Cain with sin "crouching at his door," as the Book of Genesis says so effectively, and with the distinctive mark on his forehead;(190) in David, admonished by the prophet Nathan;(191) or in the prodigal son when he realizes the condition to which he has reduced himself by staying away from his father and decides to return to him.(192) Everything takes place between the individual alone and God.

But at the same time one cannot deny the social nature of this sacrament, in which the whole church-militant, suffering and glorious in heaven- comes to the aid of the penitent and welcomes him again into her bosom, especially as it was the whole church which had been offended and wounded by his sin. As the minister of penance, the priest by virtue of his sacred office appears as the witness and representative of this ecclesial nature of the sacrament. The individual nature and ecclesial nature are two complementary aspects of the sacrament which the progressive reform of the Rite of Penance, especially that contained in the Ordo Paenitentiae promulgated by Paul VI, has sought to emphasize and to make more meaningful in its celebration. 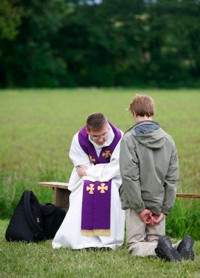 Every confessional is a special and blessed place from which, with divisions wiped away, there is born new and uncontaminated a reconciled individual-a reconciled world!


VI. Last, I particularly wish to speak of one final consideration, one which concerns all of us priests, who are the ministers of the sacrament of penance.(193) The priest's celebration of the eucharist and administration of the other sacraments, his pastoral zeal, his relationship with the faithful his communion with his brother priests, his collaboration with his bishop, his life of prayer-in a word, the whole of his priestly existence, suffers an inexorable decline if by negligence or for some other reason he fails to receive the sacrament of penance at regular intervals and in a spirit of genuine faith and devotion. If a priest were no longer to go to confession or properly confess his sins, his priestly being and his priestly action would feel its effects very soon and this would also be noticed by the community of which he was the pastor. 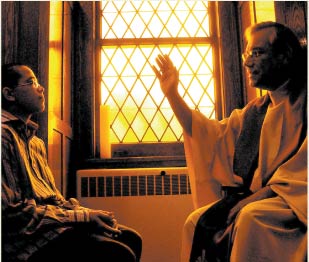 But I also add that even in order to be a good and effective minister of penance the priest needs to have recourse to the source of grace and holiness present in this sacrament We priests, on the basis of our personal experience, can certainly say that the more careful we are to receive the sacrament of penance and to approach it frequently and with good dispositions, the better we fulfill our own ministry as confessors and ensure that our penitents benefit from it. And on the other hand, this ministry would lose much of its effectiveness if in some way we were to stop being good penitents. Such is the internal logic of this great sacrament. It invites all of us priests of Christ to pay renewed attention to our personal confession.

Personal experience in its turn becomes and must become today an incentive for the diligent, regular, patient and fervent exercise of the sacred ministry of penance, to which we are committed by the very fact of our priesthood and our vocation as pastors and servants of our brothers and sisters. Also with this present exhortation I therefore address an earnest invitation to all the priests of the world, especially to my brothers in the episcopacy and to pastors of souls, an invitation to make every effort to encourage the faithful to make use of this sacrament. I urge them to use all possible and suitable means to ensure that the greatest possible number of our brothers and sisters receive the "grace that has been given to us" through penance for the reconciliation of every soul and of the whole world with God in Christ.
at 1:54 PM