The Corporal and Spiritual Works of Mercy in Those Beatified by Bl. Pope John Paul II

Blessed Father Enrico Rebuschini
Enrico Rebuschini was born in 1860 in Gravedona near Como (Italy). He came from a middle class family. After his military service, he worked as an accountant for two years.


But being in business was not his heart's desire. He wanted to become a priest, but his father was against it. Eventually his father relented. He enrolled in 1884 as theology student at the Gregorian University in Rome. 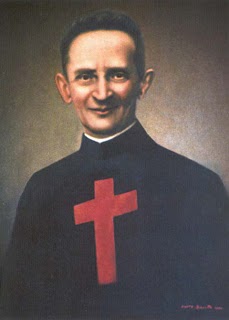 In 1886 he suffered a health problem: "Manic Depression" was the diagnosis. This led to the disruption of his studies. He returned home.

At home and at times in the hospital, he overcame the acute phase of his depression. Though not yet fully capable of working, he continued what he used to do in Rome: visit the sick, comforting and helping them cope with their situation.

Given his solid, religious upbringing he himself found help in prayer and closeness to God. He continued to desire to become a priest. His spiritual guide referred him to St. Camillus and to the Camillians.

Enrico ventured to take the step. He began the two-year novitiate in 1887 in Verona and received the priestly ordination in 1889.  In 1899 Fr. Enrico was sent to the Camillian hospital in Cremona. With zeal and reliability, he carries out his assigned tasks as spiritual counselor of the sick, hospital administrator, spiritual director of the 'Daughters of St. Camillus' and confessor.

His life was not marked by outstanding accomplishments but by fidelity in little things. In his later years, his depression recurred. But through his deep and lively relationship to God, he overcame the problem that confronted him.  His contemporaries in Cremona regarded him as "holy father." Precisely through his illness coupled with sensitivity and deep spirituality, he was to many a source of strength.