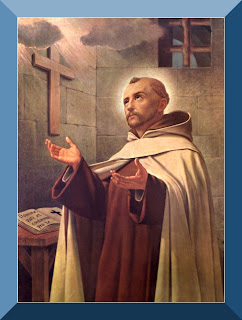 St. John of the Cross writes

"... the devil causes many to believe in vain visions and false prophecies; and strives to make them presume that God and the saints are speaking with them; and they often trust their own fancy. And the devil is also accustomed, in this state, to fill them with presumption and pride, so that they become attracted by vanity and arrogance, and allow themselves to be seen engaging in outward acts which appear holy, such as raptures and other manifestations. Thus they become bold with God, and lose holy fear, which is the key and the custodian of all the virtues; and in some of these souls so many are the falsehoods and deceits which tend to multiply, and so inveterate do they grow, that it is very doubtful if such souls will return to the pure road of virtue and true spirituality."

Bloggers Note:  Today there are many false visionaries and prophets in the world. Those visionaries or mystics who are genuine are always those who are completely obedient to the Church authorities (no matter how harsh the  judgement), as St. Pio, St. Bernadette, St. Faustina and many others were.  They also have great humility, and usually suffer quite alot because of the revelations they receive.  They do not take money for their own personal use on the basis of being a visionary, healer or prophet..

Neither do they become Saints because of any 'spiritual experience' that they may have but only by the sanctification of their lives and through living out the virtues to an extraordinary degree.  It is always best for us to stay close to the Church and to what is already approved.

One prime example of a false visionary is Magdalen of the Cross who was a Franciscan of Cordova, born in 1487, who entered a convent at age of 17. From the age of 5 the devil appeared to her as various Saints, led her to desire to be considered a saint. At 13 he said who he was, offered an agreement: he would spread her reputation for holiness, and give her at least 30 years of pleasures. She agreed, and it all came true--ecstasies, levitation, prophecies, simulated stigmata. She fooled many people in Spain, including Priests, Theologians, Bishops, Cardinals and Kings.  At the door of death she confessed. Exorcism was needed.
at 7:30 AM