Bl. Pope John Paul II on the Holy Eucharist and the Gift of the Holy Spirit

The priest is quite aware that he cannot count on his own efforts to achieve the purposes of his ministry. Rather, he is called to serve as an instrument of the victorious action of Christ whose sacrifice, made present on the altars, obtains for humanity an abundance of divine gifts. However, he also knows that, in order worthily to pronounce the words of consecration in the name of Christ--"This is my Body.... This is the cup of my Blood"--he must be profoundly united to Christ and seek to reproduce Christ's countenance in himself. The more intensely he lives in Christ, the more authentically he can celebrate the Eucharist. 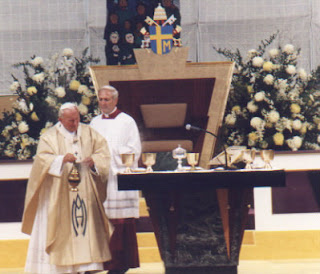 The Second Vatican Council recalled: "Priests act especially in the person of Christ as ministers of holy things, especially in the Sacrifice of the Mass" (PO 13) and that without a priest there can be no Eucharistic sacrifice. However, it emphasized that those who celebrate this sacrifice must fulfill their role in intimate spiritual union with Christ, with great humility, as his ministers in the service of the community. "They are asked to take example from that with which they deal, and inasmuch as they celebrate the mystery of the Lord's death they should keep their bodies free of wantonness and lusts" (PO 13). In offering the Eucharistic sacrifice, presbyters must offer themselves personally with Christ, accepting all the renunciation and sacrifice required by their priestly life--again and always, with Christ and like Christ, sacerdos et hostia.

If the priest "hears" this truth proposed to him and to all the faithful as the voice of the New Testament and Tradition, he will grasp the Council's earnest recommendation: "The daily celebration of Mass is strongly urged, since even if there cannot be present a number of the faithful, it is still an act of Christ and of the Church" (PO 13). The tendency to celebrate the Eucharist only when there was an assembly of the faithful emerged in those years. According to the Council, although everything possible should be done to gather the faithful for the celebration, it is also true that, even if the priest is alone, the Eucharistic offering which he performs in the name of Christ has the effectiveness that comes from Christ and always obtains new graces for the Church. Therefore I, too, recommend to priests and to all the Christian people that they ask the Lord for a stronger faith in this value of the Eucharist.


Above Paragraphs taken from:  The Intrinsic Link between the Eucharist and the Gift of the Holy Spirit -- John Paul II, General Audience - September 13, 1989