A Priest according to My Heart....Jesus on Bl. Fr. Michael Sopocko 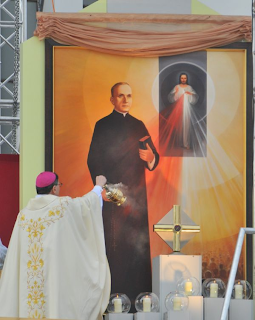 The Cardinal of Krakow likewise recalled: "Blessed Fr. Sopocko proclaimed the mercy of God not only through direct and complete involvement in this task, which was initiated by Sr. Faustina. He himself was a man of infinite trust in the mercy of God. This was his deepest spiritual attitude. This was his 'personal song.' This was a special characteristic of his Christian and priestly identity."
The Beatification date of Sept. 28 had a symbolic significance for the Archdiocese of Bialystok because on this day the archdiocese celebrates annually "The Day of Prayer for the Holiness of Priests."
Around the altar of the beatification, there was a colorful banner quoting the words of Jesus to St. Faustina about Fr. Sopocko: "He is a priest according to my heart" (Diary, 1256).
Holy Father's Words on Sopocko


Following his Angelus message from Castel Gandolfo, in Italy, the Holy Father turned His thoughts to the faithful gathered in Bialystok, Poland, for the beatification of Father Michael Sopocko. There he said:

In a special way I extend my greetings to the Bialystok, Poland, participants of the beatification of the Servant of God, Fr. Michael Sopocko, the confessor and spiritual guide of St. Faustina Kowalska. At his suggestion, [Sister Faustina] described her mystical experiences and apparitions of merciful Jesus in her well known Diary. And also thanks to his efforts, the image with the words 'Jesus, I trust in you,' was painted and transmitted to the world. This Servant of God became known as a zealous priest, teacher and promoter of the Divine Mercy devotion. ...

I unite myself with joy with the Archdioceses of Bialystok and Vilnius and with all the faithful throughout the world to whom this message of merciful Jesus is dear. My beloved predecessor the Servant of God, John Paul II, most certainly rejoices in this beatification in Father's house. He is the one who entrusted the world to Divine Mercy. That is why I repeat his wish: May the God who is rich in mercy bless all of you.
at 1:49 PM