Bl. Fr. Michael Sopocko: His own words on meeting St. Faustina and the Work involved with the Image of Divine Mercy 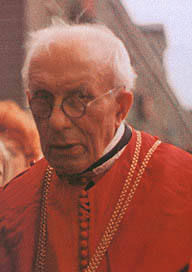 I met s. Faustina in the summer (June or July 1933) as a penitent in the Congregation of the Sisters of the Blessed Virgin Mary of Mercy in Vilnus, Lithuania (25 Senatorska St.), in which I was, then, an ordinary confessor. She attracted my attention with an unusual subtlety of her soul and a close union with God; there was mostly no matter for absolution and she never offended God with a deadly sin. Already at the beginning she stated that she had known me for a long time from a vision, that I was to be her spiritual leader and I had to carry out some God's plans that were to be presented to me through her. I ignored her story and I put her to some test which made s. Faustina start looking for another confessor, with the permission of the Mother Superior. After some time she returned to me and she said that she was prepared to bear everything and she would never leave me again. I cannot reiterate here all the details of our conversation, which is partly included in her diary, written by her on my recommendation, since later I forbade her to discuss her confession experiences.

On getting to know s. Faustina better I concluded that the Gifts of Holy Spirit worked in her in a concealed state, but quite often they appeared more openly, partly overwhelming her soul in a lively manner, arousing surges of love, solemn heroic acts of sacrifice and self-denial. Particularly frequently, I could see the work of the Gifts of Understanding, Knowledge and Wisdom thanks to which s. Faustina clearly saw the nothingness of worldly things, and the importance of suffering and humiliations. In a simple way she got to know the attributes of God, and most of all His Infinite Mercy.

On another occasion, she, in turn, kept her gaze fixed at the beatific, joyful light for some time, out of which a figure of Christ emerged in a walking position, blessing the world with His right hand, and with His left one opening His robe in the vicinity of His heart, two rays gushed out of the opened robe - a red and a white one. S. Faustina had already had such and other sensual and mental visions for several years and she heard supernatural words, captured by the sense of hearing, imagination and the mind.

Being cautious of s. Faustina's illusion, hallucination and delusion, I turned to the Mother Superior, Irene, to inform me who s. Faustina was, what opinion she enjoyed among her Sisters and Superiors in the Congregation. I also requested that her mental and physical health be examined. Having received an opinion favorable for her in every respect, still for some time I took an expectant position. I partly did not believe, I was thinking, praying and examining,
I also asked some enlightened priests for advice on what to do, without revealing what and whom it concerned.

All it concerned carrying out alleged definite demands of Our Lord Jesus to paint the picture, which s. Faustina used to see and to establish the feast of the Divine Mercy on the first Sunday after Easter. Finally, motivated by curiosity of what the picture would look like rather than the belief in the authenticity of s. Faustina's visions, I decided to set about painting the picture. I contacted an artist painter, Eugeniusz Kazimirowski, who lived in the same house as I did and who undertook the task to paint a picture for a certain sum of money. I contacted other Superior as well, who allowed s. Faustina to go to the painter twice a week in order to show what the picture should look like.

The work took several months and finally in June/July 1934 the picture was completed.  S. Faustina complained that the picture was not as beautiful as she saw it, but the Lord Jesus comforted her and said it was enough the way it was and He added: "I am offering people a vessel with which they are to keep on coming for graces to the fountain of mercy. That vessel is this image with the signature: Jesus, I trust in You" (see Image).

For the time being Sr. Faustina was unable to explain what the rays in the picture meant.
After a few days she said that the Lord Jesus had explained it to her in a prayer: "… rays
in the image denote blood and water. The pale ray stands for the water which makes souls righteous. The red ray stands for the blood that is the life of souls. These two rays issued forth from the very depths of My tender mercy when My agonized Heart was opened by a lance on the Cross. Happy be the one who will dwell in their shelter, for the just hand of God shall not lay hold of him…, I promise that the soul that will venerate this image will not perish. I also promise victory over its enemies already here on earth, especially at the hour of death. I Myself will defend it as My own glory…, I desire that the first Sunday after Easter be the Feast of Mercy…, that whoever approaches the Fount of Life on this day will be granted complete remission of sins and punishment. Mankind will not have peace until it turns with to My mercy…, Before I come as the just Judge, I am coming first as the King of Mercy, so that no one can seek excuses on the Judgment Day, the Day which is not far away".
at 9:03 AM