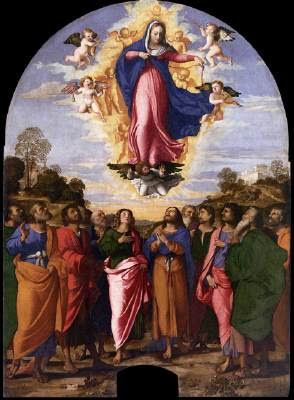 Although probably not unknown in the early Church, the earliest references to the Assumption of the Virgin Mary appear in the 4th (or possibly late 3rd) century in
Liber Requiei Mariae  (The Book of Mary's Repose), and in the writings of a Bishop Meliton. Some of the Church Fathers believed that the Blessed Virgin Mary (BVM) was assumed while still alive, others that she was assumed after she had died. Both views are permitted under the infallible definition of Pius XII. St. John of Damascus (d. AD 755) relates a tradition where, during the Council of Chalcedon (AD 451), the emperor Marcian and his wife wished to find the body of Mary. He tells how all the apostles had seen her death, but her tomb was empty upon inspection.

Festivals commemorating the death of the Blessed Virgin Mary were common from the 5th century onwards, although the exact dates were never universally fixed. In AD 556 the patriarch of Alexandria, Theodosius, attests to two popular Marian feasts in Egypt: Mary's death (January 16) and Assumption (August 9). Theodosius understood Mary to have died before being assumed, and according to the feast dates in Egypt at the time, she was assumed 206 days after her death. In AD 600, the emperor Mauricius decreed that the Assumption was to be celebrated on August 15. Soon, the Church in Ireland adopted this date, and it was later introduced in Rome. As the cult of Mary grew in the West, there was more pressure for the Catholic Church to define the exact nature of the Assumption. Pope Pius did this in 1950, in terms that are still rather general, and can be accepted by Western Catholics, Eastern Catholics, and Eastern Orthodox (See the Oxford Dictionary of the Christian Church for more information).

The Orthodox Church teaches that the Virgin Mary died a fully human death before being assumed, and celebrates the feast accordingly. According to various traditions known in the East, St. Thomas was not around when Mary passed away, just as he was absent when Jesus was raised from the dead. Because he was three days late to Mary's funeral, he requested to see Mary's body. However, when her tomb was opened, her body was not found. This is not viewed as a resurrection like her Son's, but as the first fruits of our own bodily resurrection. In one of the most complicated of Christian Hymns (utilizing all 8 tones) the Orthodox are shown the story of her journeying to heaven as her funeral procession. The apostles act as her pall-bearers. As she arrives in heaven, she is the first given the task of all the glorified saints, that of praying for us to her Son and our Lord. As a part of the interior mysteries of the Orthodox Church, the Assumption is not a point of dogma or debate, yet it is a commonly accepted belief among Orthodox Christians. Even as the faithful bury the Theotokos and see her translated to a life of intercession, we are reminded that it is through her that the Word was made flesh (many thanks to Steven Clark for this information).

Protestants have generally rejected the Assumption of Mary theologically and devotionally, probably because it is not explicitly biblical. Many Reformation denominations (like Anglicanism and Lutheranism) have set aside August 15th as a day commemorating the Blessed Virgin Mary, although without the explicit context of the Assumption. However, the Assumption of Mary is an ancient belief certainly fitting the honor of the one chosen to bear the Son of God. This dogma is solidly within the biblical tradition of holy and unique individuals being taken bodily to heaven (like Elijah and Enoch). She who is "Mother of the Lord," "full of grace," and whom "all generations shall call blessed" is certainly worthy of this honor. Church Father John of Damascus describes the importance of celebrating the Assumption quite well:

Let us then also keep the solemn [Assumption] feast today to honour the joyful departure of God's Mother...Thus, recognizing God's Mother in this Virgin, we celebrate her falling asleep, not proclaiming her as God - far be from us these heathen fables - since we are announcing her death, but recognizing her as the Mother of the Incarnate God...Let us honour her in nocturnal vigil; let us delight in her purity of soul and body, for she next to God surpasses all in purity...Let us show our love for her by compassion and kindness towards the poor...Let our souls rejoice in the Ark of God...With Gabriel, the great archangel, let us exclaim, "Hail, full of grace, the Lord is with thee. Hail, inexhaustible ocean of grace. Hail, sole refuge in grief. Hail, cure of hearts. Hail, through whom death is expelled and life is installed" (Sermon II: On the Assumption).

Email ThisBlogThis!Share to TwitterShare to FacebookShare to Pinterest
Labels: Feast of the Assumption of Our Lady