Christ, as the man who suffers really and in a terrible way in the Garden of Olives and on Calvary, addresses Himself to the Father- that Father whose love He has preached to people, to whose mercy He has borne witness through all of His activity. But He is not spared - not even He-the terrible suffering of death on the cross: For our sake God made him to be sin who knew no sin,"75 St. Paul will write, summing up in a few words the whole depth of the cross and at the same time the divine dimension of the reality of the Redemption. Indeed this Redemption is the ultimate and definitive revelation of the holiness of God, who is the absolute fullness of perfection: fullness of justice and of love, since justice is based on love, flows from it and tends towards it. In the passion and death of Christ-in the fact that the Father did not spare His own Son, but "for our sake made him sin"76 - absolute justice is expressed, for Christ undergoes the passion and cross because of the sins of humanity. 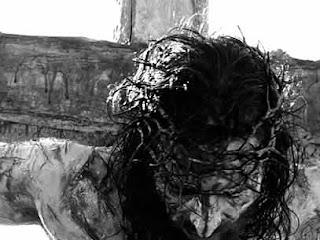 This constitutes even a "superabundance" of justice, for the sins of man are "compensated for" by the sacrifice of the Man-God. Nevertheless, this justice, which is properly justice "to God's measure," springs completely from love: from the love of the Father and of the Son, and completely bears fruit in love. Precisely for this reason the divine justice revealed in the cross of Christ is "to God's measure," because it springs from love and is accomplished in love, producing fruits of salvation. The divine dimension of redemption is put into effect not only by bringing justice to bear upon sin, but also by restoring to love that creative power in man thanks also which he once more has access to the fullness of life and holiness that come from God. In this way, redemption involves the revelation of mercy in its fullness.
at 10:10 AM

Email ThisBlogThis!Share to TwitterShare to FacebookShare to Pinterest
Labels: Dives in Misericordia, Passion of Christ, The Cross