Our Lord showed the need for prayer when He said, "Without me, you can do nothing".(John 15:5) Then He assured us of the power of prayer, "Ask and it will be givento you; seek and you will find; knock and the door will be opened to you. For everyone who asks receives; the one who seeks finds; and to the one who knocks, the door will be opened" (Matt 7:7-8). "And if you believe, you will receive whatever you ask for in prayer". (Matt. 21: 22) 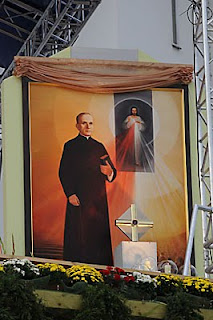 To emphasise the effectiveness of prayer still more strongly, He made use of a comparison: "What man is there among you, if his son asked for bread, would give him a stone?  Or if he asked for a fish, would give him a snake? If you then being evil, know how to give good gifts to your children, how much more will your Father, who is in Heaven, give good things to them that ask Him?" (Matt. 7:9-11)
Prayer, which is a conversation with God, should have certain characteristics. It should be trusting, humble and persistent. Above all, we must prepare ourselves for prayer: "But when you pray, enter into your room, and having shut the door pray to your Father in secret and then your Father, who sees what is done in secret, will reward you". (Matt. 6:6)

He often urged us to trust, but especially in prayer: "Therefore I tell you, whatever you ask for in prayer, believe that you have received it, and it will be yours". (Mark 11:24)

He highlighted humility in the parable of the prayer of the Pharisee and the Publican, on whom He passed judgment. "I tell you that this man (Publican), rather than the other, went home justified before God. For all those who exalt themselves will be humbled and those who humble themselves will be exalted". (Luke 18: 14)

In order to teach perseverance in prayer, He told the parable of the Unjust Judge, who refused for a long time to defend a certain widow against her adversary. “And will not God”, said Jesus, at the end of the parable, “bring about justice for His chosen ones, who cry out to Him day and night?". “Will He keep putting them off? I tell you, He will see that they get justice and quickly”. (Luke 18:1-8). And to the Apostles before His Passion, He said: "Watch ye, and pray that you enter not into temptation". (Mark 14: 38)
at 8:25 AM