Modern man feels these threats. What has been said above in this regard is only a rough outline. Modern man often anxiously wonders about the solution to the terrible tensions which have built up in the world and which entangle humanity. And if at times he lacks the courage to utter the word "mercy," or if in his conscience empty of religious content he does not find the equivalent, so much greater is the need for the Church to utter his word, not only in her own name but also in the name of all the men and women of our time. 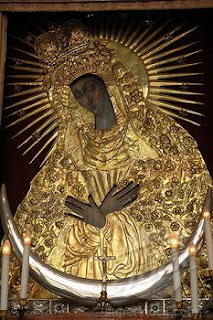 Everything that I have said in the present document on mercy should therefore be continually transformed into an ardent prayer: into a cry that implores mercy according to the needs of man in the modern world. May this cry be full of that truth about mercy which has found such rich expression in Sacred Scripture and in Tradition, as also in the authentic life of faith of countless generations of the People of God. With this cry let us, like the sacred writers, call upon the God who cannot despise anything that He has made,136 the God who is faithful to Himself, to His fatherhood and His love.

And, like the prophets, let us appeal to that love which has maternal characteristics and which, like a mother, follows each of her children, each lost sheep, even if they should number millions, even if in the world evil should prevail over goodness, even if contemporary humanity should deserve a new "flood" on account of its sins, as once the generation of Noah did. Let us have recourse to that fatherly love revealed to us by Christ in His messianic mission, a love which reached its culmination in His cross, in His death and resurrection. Let us have recourse to God through Christ, mindful of the words of Mary's Magnificat, which proclaim mercy "from generation to generation." Let us implore God's mercy for the present generation. May the Church which, following the example of Mary, also seeks to be the spiritual mother of mankind, express in this prayer her maternal solicitude and at the same time her confident love, that love from which is born the most burning need for prayer.
at 8:36 AM