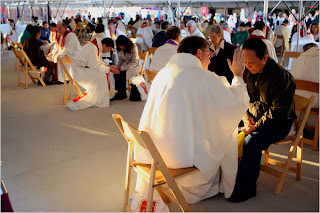 To the hands and lips of the apostles, his messengers, the Father has mercifully entrusted a ministry of reconciliation, which they carry but in out in a singular way by virtue of the power to act "in persona Christi. " But the message of reconciliation has also been entrusted to the whole community of believers, to the whole fabric of the church, that is to say, the task of doing everything possible to witness to reconciliation and to bring it about in the world. 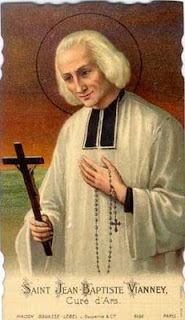 It can be said that the Second Vatican Council too, in defining the church as a "sacrament-a sign and instrument, that is, of communion with God and of unity among all people," and in indicating as the church's function that of obtaining "full unity in Christ" for the "people of the present day...drawn ever more closely together by social, technical and cultural bonds,"(34) recognized that the church must strive above all to bring all people to full reconciliation.
In intimate connection with Christ's mission, one can therefore sum up the church's mission, rich and complex as it is, as being her central task of reconciling people: with God, with themselves, with neighbor, with the whole of creation; and this in a permanent manner since, as I said on another occasion, "the church is also by her nature always reconciling."(35)

The church is reconciling inasmuch as she proclaims the message of reconciliation as she has always done throughout her history, from the apostolic Council of Jerusalem(36) down to the latest synod and the recent jubilee of the redemption. The originality of this proclamation is in the fact that for the church reconciliation is closely linked with conversion of heart: This is the necessary path to understanding among human beings.

The church is also reconciling inasmuch as she shows man the paths and offers the means for reaching this fourfold reconciliation. The paths are precisely those of conversion of heart and victory over sin, whether this latter is selfishness or injustice, arrogance or exploitation of others, attachment to material goods or the unrestrained quest for pleasure. The means are those of faithful and loving attention to God's word; personal and community prayer; and in particular the sacraments, true signs and instruments of reconciliation, among which there excels, precisely under this aspect, the one which we are rightly accustomed to call the sacrament of reconciliation or penance and to which we shall return later on.
at 8:41 AM