23. To evoke conversion and penance in man's heart and to offer him the gift of reconciliation is the specific mission of the church as she continues the redemptive work of her divine founder. It is not a mission which consists merely of a few theoretical statements and the putting forward of an ethical ideal unaccompanied by the energy with which to carry it out. Rather it seeks to express itself in precise ministerial functions directed toward a concrete practice of penance and reconciliation. 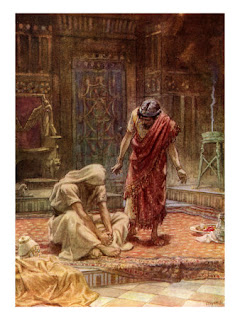 We can call this ministry, which is founded on and illumined by the principles of faith which we have explained and which is directed toward precise objectives and sustained by adequate means, the pastoral activity of penance and reconciliation. Its point of departure is the church's conviction that man, to whom every form of pastoral activity is directed but principally that of penance and reconciliation, is the man marked by sin whose striking image is to be found in King David. Rebuked by the prophet Nathan, David faces squarely his own iniquity and confesses: "I have sinned against the Lord,"(115) and proclaims: "I know my transgressions, and my sin is ever before me."(116) But he also prays: "Purge me with hyssop, and I shall be clean; wash me, and I shall be whiter than snow,"(117) and he receives the response of the divine mercy: "The Lord has put away your sin; you shall not die."(118)

The church thus finds herself face to face with man-with the whole human world-wounded by sin and affected by sin in the innermost depths of his being. But at the same time he is moved by an unrestrainable desire to be freed from sin and, especially if he is a Christian, he is aware that the mystery of pietas, Christ the Lord, is already acting in him and in the world by the power of the redemption.

The church's reconciling role must therefore be carried out in accordance with that intimate link which closely connects the forgiveness and remission of the sin of each person with the fundamental and full reconciliation of humanity which took place with the redemption. This link helps us to understand that, since sin is the active principle of division-division between man and the nature created by God-only conversion from sin is capable of bringing about a profound and lasting reconciliation wherever division has penetrated.
at 6:08 PM