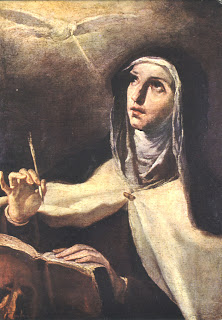 23. "Once, while approaching to receive Communion, I saw with my soul's eyes more clearly than with my bodily eyes two devils whose appearance was abominable. It seems to me their horns were wrapped around the poor priests's throat, and in the host that was going to be given to me I saw my Lord with the majesty I mentioned placed in the priest's hands, which were clearly seen to be His offender's; and I understood that that soul was in mortal sin. What would it be my Lord, to see Your beauty in the midst of such abominable figures? They were as though frightened and terrified in Your presence, for it seems they would have very eagerly fled had You allowed them.

This vision caused me such great disturbance I don't know how I was able to receive Communion, and I was left with a great fear, thinking that if the vision had been from God, His Majesty would not have permitted me to see the evil that was in that soul. The Lord Himself told me to pray for him and that He had permitted it so that I might understand the power of the words of consecration and how God does not fail to be present, however evil the priest who recites them, and that I might see His great goodness since He places Himself in those hands of His enemy, and all out of love for me and for everyone. I understood well how much more priests are obliged to be good than are others, how deplorable a thing it is to receive this most Blessed Sacrament unworthily, and how much the devil is lord over the soul in mortal sin. It did me a great deal of good and brought me deep understanding of what I owed God. May He be blessed forever and ever.
at 8:19 AM