Our Lord’s words to St. Faustina regarding the chaplet for the sick and dying: 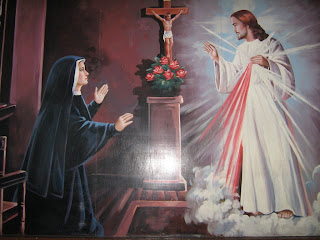 "My daughter, help Me to save a certain dying sinner. Say the chaplet that I have taught you for him.” (Diary 1565).

“When I began to say the chaplet, I saw the man dying in the midst of terrible torment and struggle. His Guardian Angel was defending him, but he was, as it were, powerless against the enormity of the soul's misery. A multitude of devils was waiting for the soul. But while I was saying the chaplet, I saw Jesus just as He is depicted in the image. The rays which issued from Jesus' Heart enveloped the sick man, and the powers of darkness fled in panic. The sick man peacefully breathed his last. When I came to myself, I understood how very important the chaplet was for the dying. It appeases the anger of God.”" (Diary 1565).
at 8:07 AM

Email ThisBlogThis!Share to TwitterShare to FacebookShare to Pinterest
Labels: Diary of St. Faustina, Prayers for the Dying

I love you Jesus..You still loves me still you are mercy..Because you know I am weak person..You are my everything.
In my darkest time I pray for you I just need to be alive.But you making me as a strong and graceful person.
Thank you Jesus. You are my God my Shepherd my all.

Thank you Jesus..You are my Lord my God.