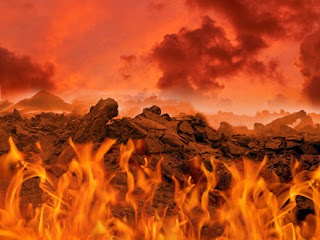 "A long time after the Lord had already granted me many of the favors I've mentioned and other very lofty ones, while I was in prayer one day, I suddenly found that, without knowing how, I had seemingly been put in hell. I understood that the Lord wanted me to see the place the devils had prepared there for me and which I merited because of my sins. This experience took place within the shortest space of time, but even were I to live for many years I think it would be impossible for me to forget it. The entrance it seems to me was similar to a very long and narrow alleyway, like an oven, low and dark and confined; the floor seemed to me to consist of dirty, muddy water emitting foul stench and swarming with putrid vermin. At the end of the alleyway a hole that looked like a small cupboard was hollowed out in the wall; there I found I was placed in a cramped condition. All of this was delightful to see in comparison with what I felt there. What I have described can hardly be exaggerated.


"What I felt, it seems to me, cannot even begin to be exaggerated; nor can it be understood. I experienced a fire in the soul that I don't know how I could describe. The bodily pains were so unbearable that though I had suffered excruciating ones in this life and according to what doctors say, the worst that can be suffered on earth for all my nerves were shrunken when I was paralyzed, plus many other sufferings of many kinds that I endured and even some as I said, caused by the devil, these were all nothing in comparison with the ones I experienced there. I saw furthermore that they would go on without end and without ever ceasing. This, however, was nothing next to the soul's agonizing: a constriction, a suffocation, an affliction so keenly felt and with such a despairing and tormenting unhappiness that I don't know how to word it strongly enough. 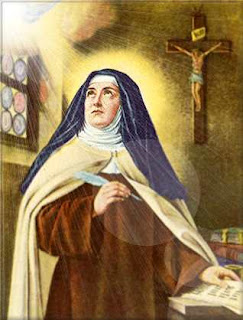 To  say the experience is as though the soul were continually being wrested from the body would be insufficient, for it would make you think somebody else is taking away the life, whereas here it is the soul itself that tears itself in pieces. The fact is that I don't know how to give a sufficiently powerful description of that interior fire and that despair, coming in addition to such extreme torments and pains. I didn't see who inflicted them on me, but, as it seemed to me, I felt myself burning and crumbling; and I repeat the worst was that interior fire and despair.
"Being in such an unwholesome place, so unable to hope for any consolation, I found it impossible either to sit down or to lie down, nor was there any room, even though they put me in this kind of hole made in the wall. Those walls, which were terrifying to see, closed in on themselves and suffocated everything. There was no light, but all was enveloped in the blackest darkness. I don't understand how this could be, that everything painful to see was visible."
at 1:57 PM