Diary of St. Faustina.....on the importance of asking Jesus for graces through the Image and Baptism 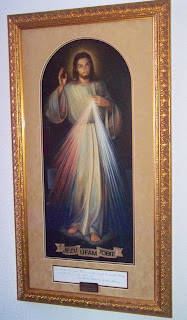 Diary 916 -  This day is so special for me; even though I encountered so many sufferings, my soul is overflowing with great joy. In a private room next to mine, there was a Jewish woman who was seriously ill. I went to see her three days ago and was deeply pained at the thought that she would soon die without having her soul cleansed by the grace of Baptism. I had an understanding with her nurse, a [religious] Sister, that when her last moment would be approaching, she would baptize her. There was this difficulty however, that there were always some Jewish people with her. However, I felt inspired to pray before the image which Jesus had instructed me to have painted. I have a leaflet with the Image of the Divine Mercy on the cover. And I said to the Lord, "Jesus, You yourself told me that You would grant many graces through this image. I ask You, then, for the grace of Holy Baptism for this Jewish lady. It makes no difference who will baptize her, as long as she is baptized.

After these words, I felt strangely at peace, and I was quite sure that, despite the difficulties, the waters of Holy Baptism would be poured upon her soul. That night, when she was very low, I got out of bed three times to see her, watching for the right moment to give her this grace. The next morning, she seemed to feel a little better. In the afternoon her last moment began to approach. The Sister who was her nurse said that Baptism would be difficult because they were with her. The moment came when the sick woman began to lose consciousness, and as a result, in order to save her, they began to run about; some [went] to fetch the doctor, while others went off in other directions to find help.

And so the patient was left alone, and Sister baptized her, and before they had all rushed back, her soul was beautiful, adorned with God's grace. Her final agony began immediately, but it did not last long. It was as if she fell asleep. All of a sudden, I saw her soul ascending to heaven in wondrous beauty. Oh, how beautiful is a soul with sanctifying grace! Joy flooded my heart that before this image I had received so great a grace for this soul.
at 11:13 AM

Email ThisBlogThis!Share to TwitterShare to FacebookShare to Pinterest
Labels: Diary of St. Faustina, Graces through the Image, Jew, The Sacrament of Baptism