Early Days of the Sisters of Merciful Jesus

Father Sopocko came back to Vilnius on August 19, 1944. In November, Faustina Osinska together with her friends, asked him to accept their vows. In connection with this on November 9, 1944,
he started to give to the first six a retreat. This retreat was to be an immediate preparation
for the ceremony of the vows, which were planned for November 16. 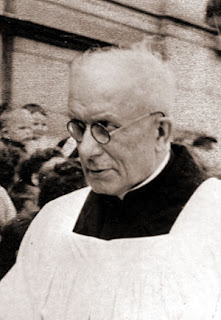 "After the retreat, at the appointed day, on early and dark morning, for the curfew was still obligatory, from different parts of the city, six girls came from the Zarzecze suburb, to the chapel of Carmelite Sisters’. There in a "catacomb" atmosphere after Holy Mass at five o’clock they took their simple private vows of loyal service to the Most Merciful Savior and His Merciful Mother. It is impossible to describe with words the joyful atmosphere that prevailed among the "newly vowed" of Christ. A simple meal was prepared at the convent gate by hospitable Sister Carmelites. How happy they were in spite of different kinds of lacking, they were so rich in spite of poverty showing itself from everywhere, they were brave and full of trust in spite of the dangers lying in wait from everywhere" (Michael Sopocko, memoirs).

After the war was finished in 1945, Lithuania, was joined to USSR. Mass migration of the population of Vilnius and its region to Poland took place. Archibichop Jalbrzykowski was forced to leave Vilnius, with all the Curia and the Seminary. During this time also three sisters went to Poland. Because of their departure, on November 16, 1945 the vows were renewed only by three sisters, which remained. Faustina and Benigna longed for religious habits, for the convent, for a meager place with simplicity where in common life they would glorify the Merciful God. Vilnius at those times did not give any hope for it. To realize their desire, they decided to go to Poland.
Before they left, on August 24, 1946, they paid their last visit to Fr. Michael Sopocko.

"Our travel leaving Vilnius was quiet. One passage of our life is finished, we are going to start a new life to fulfill the will of the One who has chosen us..."
(Diary of sr. Benigna).

On November 16, 1946, "all six" once more gathered together this time in Poznan to renew their vows. Fr. Siwek, a Jesuit, said Holy Mass. The Sisters wanted to realize the idea of Divine Mercy
in different ways. Few of them wanted to found a religious congregation, others a lay institute and still others wanted to be in the congregation but they felt responsible for their families. In this way the "first six" were divided into three shades, of which Sr. Faustina spoke.