Thus, in our world the feeling of being under threat is increasing. There is an increase of that existential fear connected especially, as I said in the encyclical Redemptor hominis, with the prospect of a conflict that in view of today's atomic stockpiles could mean the partial self-destruction of humanity. But the threat does not merely concern what human beings can do to human beings through the means provided by military technology; it also concerns many other dangers produced by a materialistic society which-in spite of "humanistic" declarations-accepts the primacy of things over persons. Contemporary man, therefore, fears that by the use of the means invented by this type of society, individuals and the environment, communities, societies and nations can fall victim to the abuse of power by other individuals, environments and societies. The history of our century offers many examples of this. In spite of all the declarations on the rights of man in his integral dimension, that is to say in his bodily and spiritual existence, we cannot say that these examples belong only to the past.

Man rightly fears falling victim to an oppression that will deprive him of his interior freedom, of the possibility of expressing the truth of which he is convinced, of the faith that he professes, of the ability to obey the voice of conscience that tells him the right path to follow. The technical means at the disposal of modern society conceal within themselves not only the possibility of self-destruction through military conflict, but also the possibility of a "peaceful" subjugation of individuals, of environments, of entire societies and of nations, that for one reason or another might prove inconvenient for those who possess the necessary means and are ready to use them without scruple. An instance is the continued existence of torture, systematically used by authority as a means of domination and political oppression and practiced by subordinates with impunity. 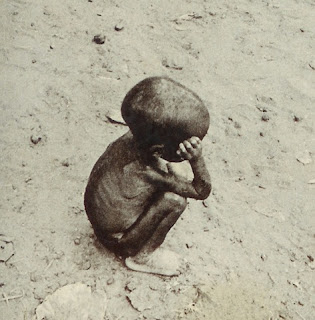 Together with awareness of the biological threat, therefore, there is a growing awareness of yet another threat, even more destructive of what is essentially human, what is intimately bound up with the dignity of the person and his or her right to truth and freedom.


All this is happening against the background of the gigantic remorse caused by the fact that, side by side with wealthy and surfeited people and societies, living in plenty and ruled by consumerism and pleasure, the same human family contains individuals and groups that are suffering from hunger. There are babies dying of hunger under their mothers' eyes. In various parts of the world, in various socio-economic systems, there exist entire areas of poverty, shortage and underdevelopment. This fact is universally known. The state of inequality between individuals and between nations not only still exists; it is increasing. It still happens that side by side with those who are wealthy and living in plenty there exist those who are living in want, suffering misery and often actually dying of hunger; and their number reaches tens, even hundreds of millions. This is why moral uneasiness is destined to become even more acute. It is obvious that a fundamental defect, or rather a series of defects, indeed a defective machinery is at the root of contemporary economics and materialistic civilization, which does not allow the human family to break free from such radically unjust situations.

This picture of today's world in which there is so much evil both physical and moral, so as to make of it a world entangled in contradictions and tensions, and at the same time full of threats to human freedom, conscience and religion-this picture explains the uneasiness felt by contemporary man. This uneasiness is experienced not only by those who are disadvantaged or oppressed, but also by those who possess the privileges of wealth, progress and power. And, although there is no lack of people trying to understand the causes of this uneasiness, or trying to react against it with the temporary means offered by technology, wealth or power, still in the very depth of the human spirit this uneasiness is stronger than all temporary means. This uneasiness concerns-as the analyses of the Second Vatican Council rightly pointed out-the fundamental problems of all human existence. It is linked with the very sense of man's existence in the world, and is an uneasiness for the future of man and all humanity; it demands decisive solutions, which now seem to be forcing themselves upon the human race.
at 6:36 AM